Correct this and throw far instantly

It’s the summer season, and that means it’s time for summer programs for shot put and discus techniques.

MANY coaches & throwers are attending ATN summer camps while others are competing in Junior Olympics or regional meets.

… and most of these elite competitions are overseas until about mid-August.

No matter where you are, the #1 thing we wanna be thinking about is how to simplify to get the best results—fast!

Right now, I’m closing in on the end of the ATN Summer Throws Camp Tour… 4 cities down, 2 to go!!

… so Mrs Arete & I are prepping for the Chicago camp, then we’ll be ending with a newly added camp in Des Moines, Iowa.

One of the things we talk about at the TCR™ Summer Throws Tour is the concept of simplicity!

SIMPLICITY is the fastest way to get lasting results.

Who isn’t looking for that?

At the end of each camp day, when we’re putting all 6 pillars of the throw together (“Pillar Connection”) and starting to actually throw…

… moving from Pillar 1 – 6 to the full throw, we really emphasize 2 things in our Pillar Connection segment:

These are 2 different technical positions that teach the right movement mechanics.

The Wind Up 1 start and the Pillar 2 start have similar objectives, but both eliminate a lot of excess motion in different ways.

… and excess motion is what destroys technique, crushes balance and thus speed, and increases the likelihood of fouls, lost distance, and slow-down of technical development.

It’s also where young throwers tend to get out of control.

One of the MOST COMMON mistakes in the set up of a rotational throw and the #1 thing we want to eliminate is the multi-wind.

There are several variations of the multi-wind, but it’s basically when the thrower is winding back and forth, multiple times, shifting side to side instead of twisting to create separation and stretch reflex.

Shifting back and forth sets the wrong rhythm and motion pattern.

Let’s see what I’m talking about in action!

For Example: In the discus, what you want a thrower to focus on is setting up the throw via the arm swing to set up the beginning of the wind that creates twisting vs shifting. The right swing sets up the correct long path, that turns into a twisting motion and that helps set the correct rhythm and long path in the rotational throw. 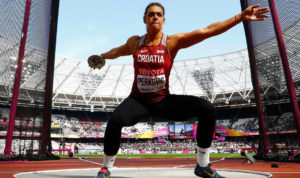 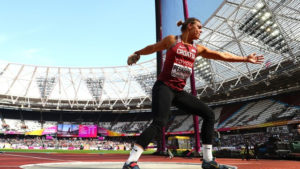 It’s a bit different in the Rotational Shot. We’ll save that for a video soon!

At our Summer Throws Camps, Pillar 1 & 2 start up is talked about a lot and in the TCR™ system online inside the membership.

The Wind up is what makes, or breaks the overall success of the throw EVERY SINGLE TIME!

… and there are numerous other details that are often overlooked.

It’s a big part of how Jason Harrell went from never making an NCAA championship (Top 24 in college) to 4 consecutive US championships (2 finals, and #16 in the world this year.)

Correctly setting up the Trigger in Pillar 1, ie the wind up, connects the chain reaction of the throw into Pillar 2 correctly…. and this is where we are setting up MAXIMUM POWER.

* Remember me talking about the “Windows” in technique a few emails ago? Yup, here it is again!

If the technique falls out of the window in Pillar 2, it is usually due to the Wind Up being set up incorrectly.

This technique tip is a biggie, and I can go on and on, but if you would like A LOT more on this and of all 6 pillars of the throw for discus, rotational shot and glide shot…

…then I highly recommend you joining us at one of our last 2 summer camps, or join the the TCR online membership, and you will get a lot more info on this, along with hours of throws video analysis, throws coaching courses and so on.

Well, it’s that time in America where we start firing up the grill and lighting up a few fireworks!

Thanks to everyone who camp to the So Cal and Nor Cal camps last week. Both camps were sold out and everyone who attended worked VERY HARD!

Use It or Lose It