In this article, I’m going to stage an intervention on how to teach the sweep leg.

If you’ve been taught or you currently coach the scissor style, the kick, the driver, or any other strange sweep nonsense, then this throws coaching intervention is for you.

You’re probably saying to yourself, “Well, which is it? a sweep or a “kick the right leg?”

The Wider, The Better.

The leg must be wide.

Do NOT teach, coach or even whisper a narrow sweep leg.

There are a number of reasons why it can be wide and why it ends up being narrow.

Narrow is a result of things falling apart. Teaching it to be narrow is a mistake.

I have seen videos on YouTube of it being taught horribly wrong.

If you are new to throwing, incorrect explanations of technique could possibly seem to make sense because you’re new to the sport and open to anything…

… But in reality, what they’re saying makes no sense at all; especially if you’ve been inside the TCR system.

Now, I know there is no malice on the part of those teaching it wrong, but they owe it to themselves and the throwers they teach to learn how it really works.

Sometimes this narrow pendulum style sweep is justified because people claim in teaches kids to move across the circle. Teaching kids to use the entire ring is often is a mistake too. 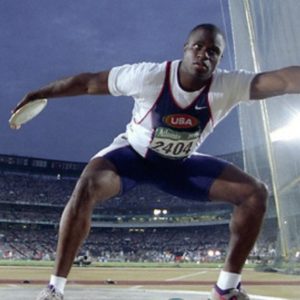 Anthony Washington won the 1999 World Championships, setting a WC record of 69.08m at the time. (And inside a stadium… that’s a massive throw!)

He is about 6’1 and weighed 235lbs, perhaps the greatest thrower pound for pound in this history of the sport.

He set a championship record at the time… and not to mention, he was lightning fast!

Don’t get hung up on that “whole ring” thing either.

When you teach kids to move across the ring the wrong way, your teaching worse technique.

There is only one way to sweep.

If you see someone not teaching a wide sweep leg, please attempt to start a throws coaching intervention – Lol

The longer a coach insists on teaching the narrow kicking type sweep, the more damage to the thrower’s immediate and long-term development.

So, vow to save a thrower from bad coaching.

There is no narrow sweep; only wide.

Learn the TCR System, learn to how to filter potentially confusing info you find on the Internet, and master how to fast-track your coaching and throwing success.

[VIDEO] “I Don’t Know Anything”