TOO STRONG TO THROW FAR

Your lifting program has to enhance throwing, not get in your way.

In November, I enjoy focusing on the weight room, breaking down technique, and enjoying the somewhat slower pace before preseason begins.

It’s a time where I could care less how far an athlete is throwing….

… and by that I mean, the off season pace allows us to

GPR is a relatively straightforward concept.

If an athlete has gross posture imbalances, they have limitations in their ability to throw far.

One of the biggest mistakes I see in most strength programs is the narrow focus on pure strength development.

That is not to say that we don’t focus on strength development- WE DO!

However, the one thing that is critical to understand is that too much focus on pure strength in a training program results in fatigue.

This fatigue will create an adverse reaction to the central nervous system’s requirements in regards to throwing.

Now in the summer program, or early fall when there’s much less throwing happening, this fatigue will not have as much of an impact, however, once throwing and strength training resumes on a more regular basis, it’s really important to make sure that the body is fresh for throwing, specifically the central nervous system.

When the thrower has been “beat to sh#t in the weight room”, they’re not going to be developing efficient movement patterns in the ring.

Bottomline… your lifting program has to enhance throwing, not get in your way.

Any training that falls victim to the “pure strength” lure, will leave a thrower strong as sh#t, but not throwing to their potential.

The best programs focus on a strength-training program that develops the same type of speed and power required in the ring is critical for the success of the thrower!

In the ATN® Strength Training Program, we do NOT focus on dead lifts.

I know many programs that include them, I know of many elite throwers that use them, but we don’t focus on them and here’s why:

It simply is not the most effective movement that translates to the movement of the throws.

Instead, we focus on heavy clean pulls because the object in this lift is to always be accelerating the weight to keep the central nervous system (CNS) focused on fast, ballistic movement….

… as it is in throwing the shot put and the discus.

Sure, moving really heavy things (like in the case of the dead lift) will elicit a positive hormone response and increase your strength, however, the Arete® approach achieves better effects by using a slightly lower weight because we’re always training our throwers to be moving at a higher rate of speed.

The bottom line is when you’re in the ring you have to be able to move as fast as you can, and training strength patterns that develop strength and speed is typically the number one focus.

Jason’s collegiate lifting program got him stronger in the squat, dead lift, and bench press; it was a power movement dominant strength program, and Jason’s core strength levels were respectable.

In Jason’s first year with me, we overhauled his strength training and watched his power lifts stay around the same, but his Olympic lifts took a big jump.

As a result, Jason’s competition average increased by 17 feet!

After training for 1 year with ATN®, Jason went from

That’s a massive change in a year.

Jason passed all but 3 of the top 24 throwers in the NCAA from the previous year- huge difference!  Now Jason sits on a PR of 65’48” in the discus , and we’re going for more as we train for the 2021 Olympics.

What if the throwers are high school level?

What happens if the programs are changed?

A few years ago, an Arete® athlete switched from the glide to the spin, and we completely changed his weight training program to a Block periodization program with the early focus on GPR.

The results = he improved 17 feet in the shot put from his sophomore year to his junior year- 45 ft to 62 ft! 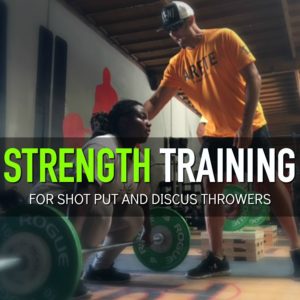 From the start, we focused on

The move to Block Periodization lead to huge increases, and the move away from a block periodization to a standard linear periodized program resulted in a decline in throws, a slew of choric injuries, and a finish at the biggest meet of the year that was 4 feet below his opening mark in January.

I think that pretty much sums it up.

Block periodization creates multiple peaks and trains the body to be ready to peak multiple times.

In a linear program, if you miss the mark, you are often screwed.

Remember the role of a strength-training program is to produce better throwers, that throw farther, not just lifting to get strong.

Make no mistake your weight training is a vital part of the elite throwing performance, but HOW you go about it matters!

So, before you get sucked in by the lure of putting up MASSIVE NUMBERS, “I’m HUGE!”, or chest pounding animal strength (I get the appeal)…

… don’t forget throwers are throwers first and strength training is just part of the process.